I'm not in Korea anymore, and it shows.

Hello readers. I'm happy to say that I'm alive and well back in the US, but I'm sure you couldn't care less. I do read your comments and write back when appropriate. Thank you for your continued support and for your attention, even to my old posts. Thankfully, not too much changes in the spa world, but as usual please let me know if my information is out of date. I do my best to stay on top of it but it's difficult when I'm continents away.

Now, for the purpose of this post. I recently found a couple of very interesting articles that I thought would be of interest to you as spa-seekers in (or even not in) Korea. I'd like to introduce one of them here first, and I will post the others separately so they can get their own spotlight.

Firstly, this is an older (updated in 2015) article, but I just came across it. CNN reporter Frances Cha wrote about her experience at Busan's SpaLand jjimjilbang. It's a great little article to remind us all how great things can be when they are a bit more luxe than expected!


Posted by Sonja No comments:

How was your winter? I just want to check in with you and let you know that I continue to maintain this resource for you all to enjoy. I also want to thank you for all your clicks, comments, and other support. Now to the point:
The past few months I've found some excellent new resources for you all. I'll share them now.

The first is an amazing collaborative Google map of several sauna, hot springs, and jjimjilbang throughout the country, each with their own little accompanying review. Let's work together and fill up that map!

Another page I've recently been told about is koreanspas.net, which is growing as the blog owner learns of new jjimjilbang and adds them. Use the menu to search for a place, and check back for more to be added.

They're just getting started - give them some love! 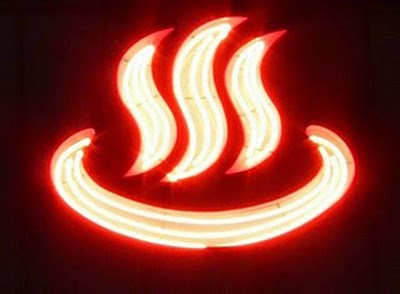 
I was having such a nice relaxing time around Asan, I decided to skip the late train back to Seoul and do something I have never done- stay at a jjimjilbang! I had found this place online before I left, and it's easy to walk to from the Onyang Hot Springs. Just cross the road in front of the hotel, go under the train tracks, and you will see the neon sign (assuming you read Korean- if not a taxi might be best). I got there quite late and it was crowded, but it was Friday night. It is 5500 won to get in, 7500 with clothes.  Its an older building, and probably due to the crowds, not the cleanest. The jjimjilbang area has a central big room where many people were laying down, and along the sides 2 men's sleeping areas. There is a small restaurant and a PC room, no wifi. None of the jjimjilbang rooms were very hot; there is salt, charcoal, ice and maybe one more? I was confused over sleeping arrangements, since there were only men's sleeping areas and most everyone was just laying in the central area, so I asked. Turns out the women's sleeping area is in the locker room, and small room near the back. You can get a big blanket for 1000 w, and they have mats. It was wall-to-wall people, so I ended up sleeping on the only free space- the pile of mats in the corner! It was comfy, but all night people kept going in and out, and it wasn't very quiet. Also at around 5 am a huge (very loud) group of women came in to the sauna, and it wasn't possible to sleep after that. So, not very restful, but since it was my first time ever sleeping at a jjimjilbang, I don't really know what to expect. I don't sleep well anyway, even at home!

The bath area has one tub that is hot spring water, so that is nice. It is also jeweled with huge cut rocks, so its really cool looking! There is a hot bath, a warm bath, and the hot spring water bath. Along the back of the room is a large very cold tub, and a smaller not-so-cold tub. That was really great, often the cold tub takes my breath away but this one was just right, and it has waterfall jets for a shoulder massage. There are 2 saunas in the baths as well, and skin scrubbing.  Probably due to the huge group of 5 am women, the shower area was pretty grubby in the morning. 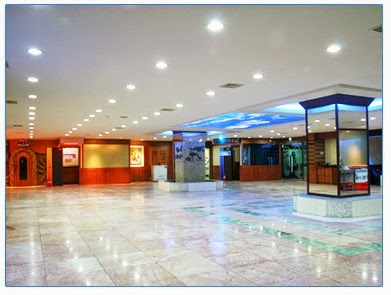 One thing to watch for was the jjimjilbang clothes- they were small! I am a small woman, about 110 pounds, but the shorts were tight on me. I saw several larger ladies in the jjimjilbang wearing pajama pants or shorts that were their own, probably for this reason. The shirts were okay, but the shorts seem to be cut for children! However, they are not picky about wearing your own pants if their shorts don't fit obviously, so that was nice and a good way to avoid this problem is to bring shorts or pants (I wished I had, those suckers were tight!) The locker room also has a wonderful store, with the best selection of shampoo and conditioner packets, masks, rubs, and scrubs I've ever seen. I love to try new masks and shampoos, so that was great. The staff is also very helpful- I broke a tooth on kalbi earlier in the evening (ouch!) and it began to hurt around 2 am. The locker room attendant took me to the front desk, explained what had happened, and sent me right outside the jjimjilbang to a nearby mart with tylenol, and stayed at the desk so I could be sure to get back in with no issues. It was very kind of her.
Open 24 Hours
Costs: prices below include 12 hours in the facility
Sauna only
Enter 5am~8pm Adults: 4,500 won / Kids: 2,500 won
After 8pm (overnight) 5,500 won / Kids: 3,500 won

Sauna + Jjimjilbang
Add 2,000 to prices for sauna only 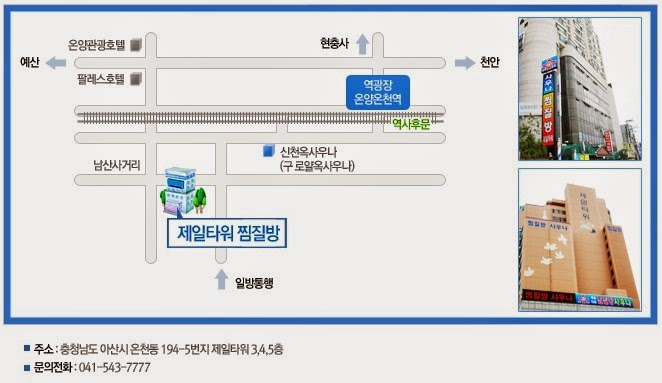 This is a really new hotel, with the hot springs sauna in the basement. At first I thought it must be small, but it is huge! It is right across the street from Asan Spavis. The admission is only 6,000 won, making this a big bargain! The locker rooms are clean and the lockers are big, full-length ones, nice if you are carrying a big backpack.

Inside there are lots of showers, and the hot springs is huge. It has a central warm tub, hot tub and lavender tub. In the corner is another warm tub, along the sides are a great waterfall cold tub and a sun tan spot next to the floor to ceiling windows. The whole sauna area is gorgeous and bright. There is also a dry sauna, and a super hot (too hot for me!) steam sauna. Outside is the nicest outdoor bath I have ever seen, with real trees (not fake ones!) and real birds singing. There are 2 rocky pools, one warm and one cold, and a hot hinoki bath out here. I spent a long time outside, it was great listening to the birds, and it even snowed while I was there. The locker rooms and baths are constantly being tidied, so it is very clean, probably the cleanest sauna I have ever been in. There were a lot of people there, but the place is so big it doesn't feel crowded. 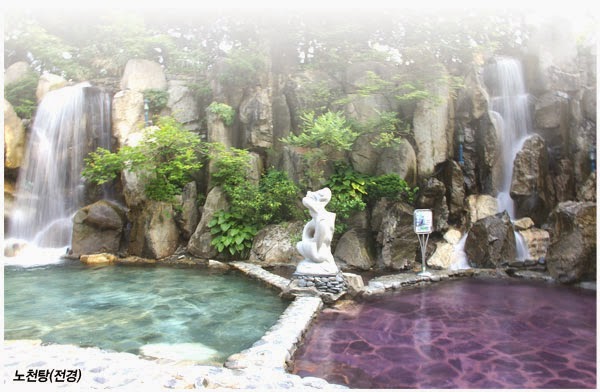 One nice touch is the ondol-floor resting area with a TV in the locker room, its a nice place to have a snack and relax between soaks. There isn't food, but the locker room attendants will go to the snack bar outside (so you don't have to get dressed!) and get you iced green tea, shikae rice drink, etc. 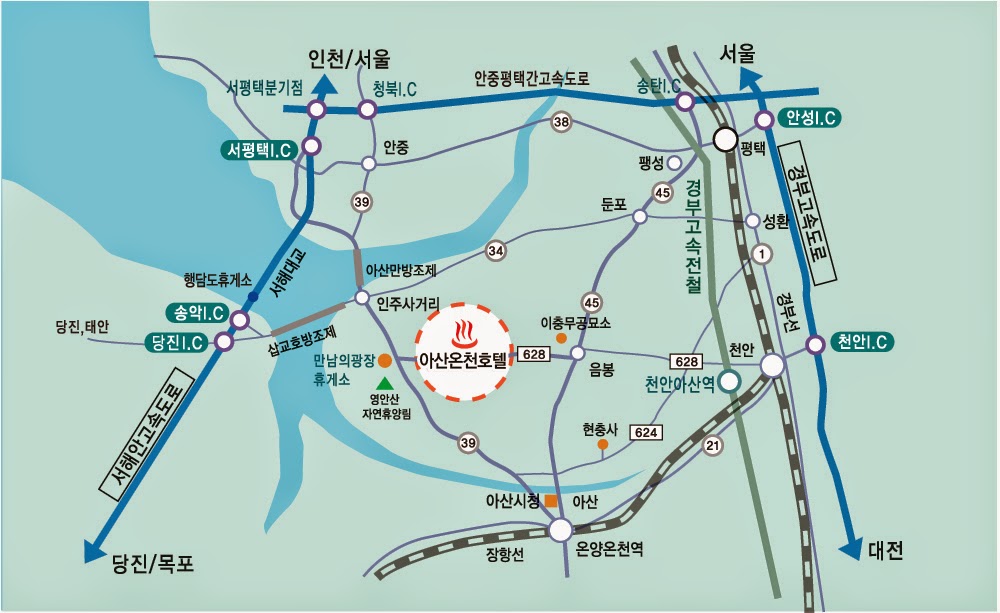 Posted by Sonja No comments:

Have some information about a sauna, jjimjilbang, or spa?
Email me!

The Tops... according to me